Sam & Aaron is a short illustrated story I am currently creating. You can find it here.

I knew from the beginning that I couldn’t illustrate Sam & Aaron in the styles I have become accustomed to while learning digital illustration from grit-loving concept artists in the entertainment industry. The story’s tone is of puppy love, happiness, and life’s simple beauties and the art really needed to reflect that. Even—maybe especially—if that meant learning a totally different illustration workflow. This first page was my crash course in discovering this workflow. 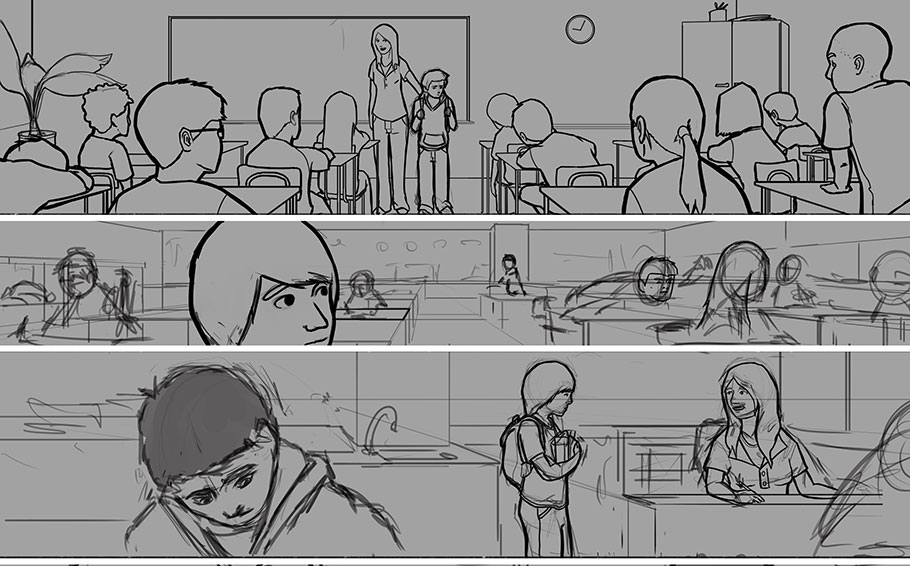 I let myself be as rough as I wanted with the layout sketch, since I was sure none of these lines were to make it to the final image. I dabbled here and there with how I might treat the lines, but it was really still mostly experimentation. All the remaining pages in the story are at this phase. 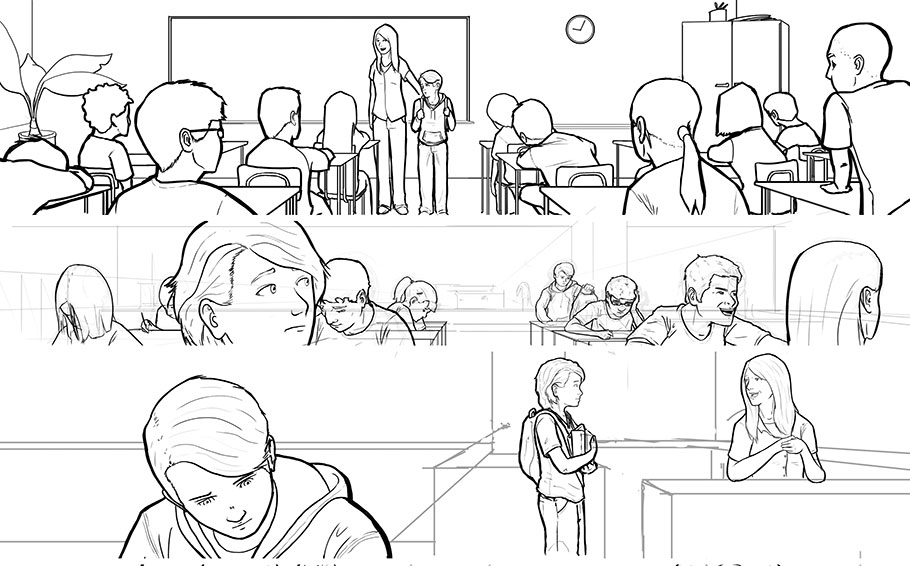 You will notice the dramatic shift in Sam and Aaron’s character models. I had decided on a line-work  and mostly plain color approach because it was familiar and approachable. However, I wanted maintain the sense that the characters were still believable people and not cartoons. Upon reaching this stage in drawing, I decided that their depictions were too simplified and tipped too far over the cartoon edge. So I took some Time away from the page and redefined model sheets for the two boys, trying to inject a better sense of form with the lines. (I’ll make a dedicated post to this process some Time in the future.)

This was when I was really taken to school for this workflow. The proper use of line weight had been something I had an academic understanding of, but had difficulty implementing it into my drawing. I started looking up a lot of reference to see how other artists used line weight while working to steady my hand for better control of the lines. Progress was admittedly slow until Scott Robertson uploaded his video How to Think About Line Weight to his YouTube channel. Despite that there was no information in the video I was not already aware of in some capacity, just watching the real-Time process of Scott building up the lines and narrating really pulled everything together for me. It seems so simple now, but I guess it just hadn’t “clicked.”

Now I won’t say I’m an expert in line-weight now, but I sure as hell feel much more confident with it. 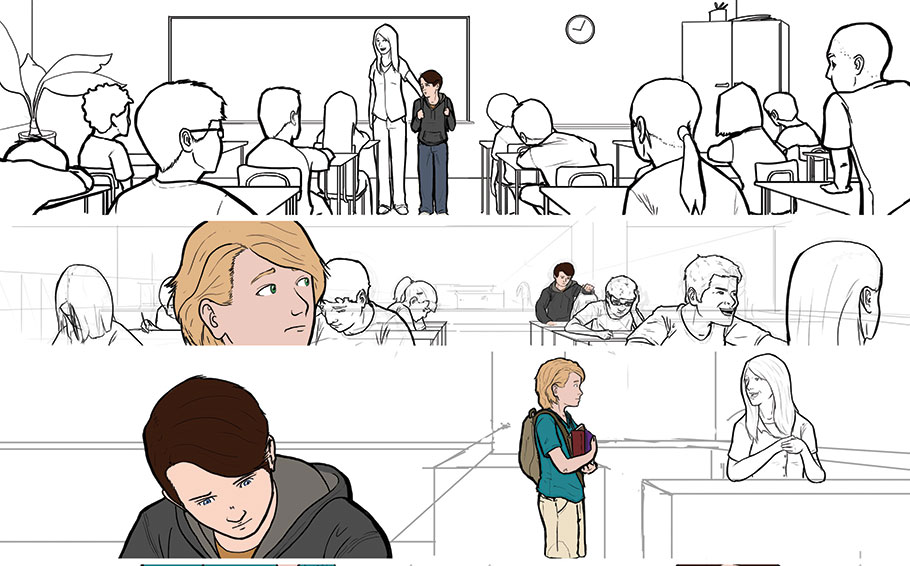 Starting in on color was a little easier, since it is much easier to play with attributes of all the colors when you work digitally. The fixed criteria I had for my colors is that they’d be saturated and bright. I started with the two boys  because they will be the focal point of any page they are in. So their colors will define the others in the page.

Now I know, Aaron’s black hoodie is neither bright, nor saturated. But it was a predefined part of his character. So… Deal. 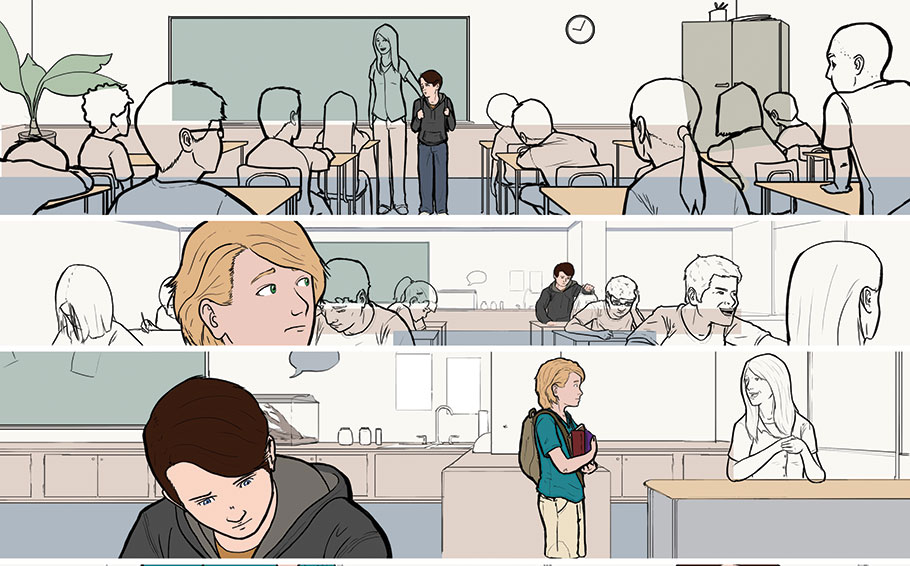 The background was kept very simple. I tried to keep the colors used to a minimum. The colors I did use I kept to nearly the same luminosity (I often work from the LAB color picker) so that they would provide a more consistent value for the background. 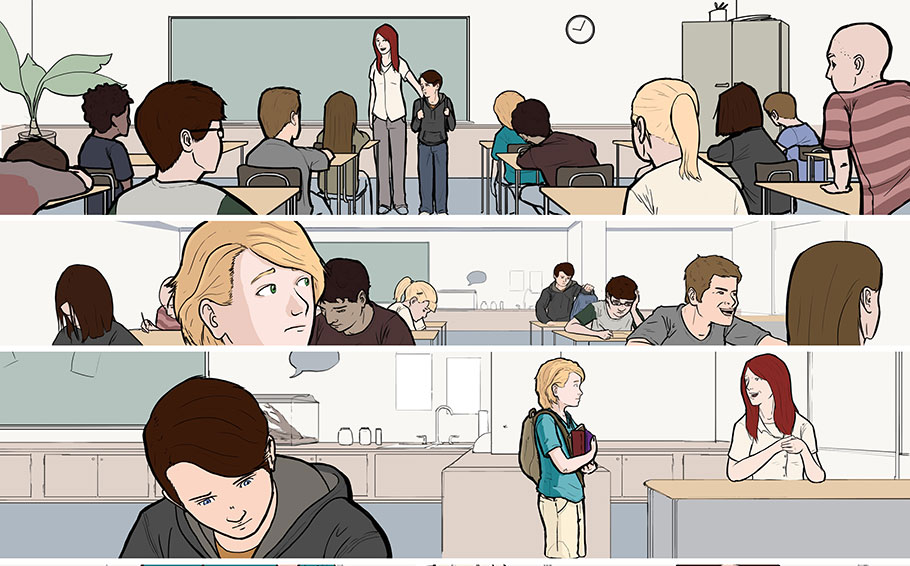 Here I have filled in almost all of the remaining characters and objects. The tricky part here was keeping their coloration believable and consistent with the page, but not draw too much attention from the two boys. I also started testing some lighting on Sam’s face. The teacher’s red hair was inspired by my real sixth grade teacher. 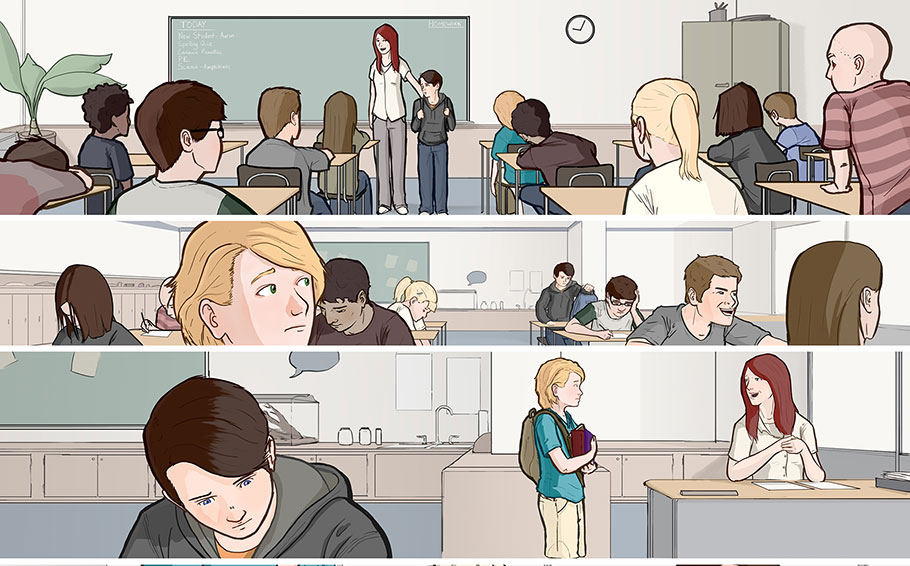 This is the final state of the image. I tossed back and forth about having any lighting at all in the story. Mostly to ensure I wouldn’t slip into my habits of using too much shadow. However, I decided that I really needed some to help define the shapes. It obviously also helps keep the art on the realistic side of the fence.

In practice, the base color of all the characters is actually the shadow color. I copied the color layer, lightened, then set the layer to screen to give me the lighting effect I wanted by masking out “shadowed” areas.

As a final touch, I went over all the line work and colored each line a very dark shade of whatever color that line contained. It is a very subtle effect, but it helps soften the image as a whole. I also felt odd about having that much true black in the image.

So that’s the process of the first page and how I established the look of the story! Keep a look out on the Sam & Aaron section of the site for page 2!

Were you or one of your close friends ever the "new kid" in class?