I am a man of phases and mild neurosis. At Times I am embarrassed and ashamed of the credibility of this statement. Others, I wear it proudly touting it as a sign of eccentricity or some other distinguishing trait. This back-and-forth is itself the phases of neurosis manifest.

Or not. Who cares? Why I chose to start out with this admission may or may not become apparent by the end.

“Why do I have this website, and what I am I trying to do?” This is the question I’ve been asking myself since I first started to build it. I’m still asking myself this question today. Inevitably this question becomes a full audit of my history of creative works and the state of my future plans. Which seems to be taking the form of a blog post this Time. A little more meta than usual but I don’t mind.

Skipping all the boring and compromising details of the individual projects and plans, I’ll skip ahead to the part that ultimately ever seems to matter. The beginning again: “Why?” Why do I do any of this? Why do I create? It’s a question that every creator inevitably asks at some point. Even if it’s only to fill a hole in their release schedule. Though that doesn’t make it any less trivial of a question.

It’s hard to look back and say that there was point and a reason where I decided to start making things. I could say that LEGOs might have had a hand in building the habit. I could also mention the trampoline and sandbox in my childhood home and how they might have honed my imagination. It could be all of these things and others that may take an outside professional to pinpoint. For my conclusion, I’d say I just thought it would be cool to make things similar to the things I like. (A little spoiler, I think that’s still a legitimate part of it.)

By the Time I started digital painting, this reason started to shift. I had a broader understanding of what it meant to be successful in an endeavor of creation and became acutely aware of where I was in this definition. The materials and videos I learned from, created by concept art professionals mostly, reiterated Time and again that the design and idea was worth more than most technical prowess. This concept extended to the notion that technical prowess only serves to be the means to an end to express that idea. It seems quite obvious when stated plainly, but it was a significant realization for a newbie. 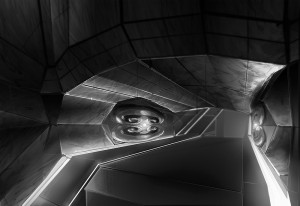 However, this realization came with the side effect of divorcing my intention to create things I like, from the perceived requirement to make something “cool.” Perhaps given rise from my previously powerful levels of self-doubt, I had slowly decided that the things I liked and might paint, were too juvenile and basic to be actually “cool.” Instead I favored the types of subject matter I was seeing in the materials I was learning from, and merely putting a twist on them to make them somewhat my own.

I knew I was in trouble when I would tire of this subject matter and decide to try to pull more entirely from my imagination. It was more than the “blank page” fear artists describe when looking at an empty page, the task daunting within the unknown. Instead I was faced with the thing I fear most in myself: apathy. I’d pushed my ideas aside so much that apparently I didn’t care to try anymore.

I spent a long Time in this limbo. Occasionally something would peek through and I would find some elation in creating something that felt genuine and I was proud of, but generally it was a miserable and embarrassing grind to maintain skill. Finding something I wanted to create and had enough faith in to create was proving difficult, and some persistent other turmoil in my life made it all the more elusive.

So I changed the intention from things I wanted to create to things I needed to create. Not long after, work on Sam & Aaron began. 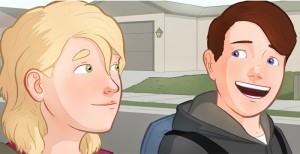 In all the self-evaluations of my work, Sam & Aaron is always the standout. It is the first one of my “projects” to reach completion. It was the first to give me that complete sense of the more intensive creative process. It’s the only one that keeps me from that feeling of impotency.

Of course this is a bit unfair. I recognize that I’ve done worthy works. But the videos, paintings, and the like are pieces that can be finished in the space of a day or a week. They are more impulsive, single statement creations. Not to say they aren’t valuable, but they are not the same as a full project which takes care, Time, and planning to execute.

Long tangent short, Sam & Aaron was a success and remains an example to me moving forward. The problem is that not every project can be driven by a need to overcome personal trauma. They should certainly be driven by some personal reason on some level, but I’d prefer to not need to rely on strong emotion to get me through a project. Perhaps it’s expecting a lot of a fallible human mind, but there must be something more empiric for me to rely on.

So the question remains as we return to present day. I’ve been working on a few things in the Unreal Engine, propelling myself along by the simple mantra of “do at least something today.” I am enjoying what I’m doing, but still lacking my identity as a creator. Still the lacking the cognizance with which to imbue this site. GaryDoesThings was meant to be the central place for me to express and share the things I create. Yet, since I hit the launch button I’ve been too self-conscious of my lack of “why” to create with it.

I still intend to reach that awareness, to declare with certainty my identity as a creator. I know that if I can, I will have that feeling of purpose that propels me to do better things. Perhaps the thing I really need to do is stop thinking about it.